Ranks in the Air Training Corps

Much like the Royal Air Force, Air Cadets have a rank structure in place. This structure applies to the Staff as well as the Cadets. It is important to distinguish between Rank and Classification.

Classifications show the level of training a cadet has attained, rank shows what ability the cadet possesses.

The first rank is Cadet, this is the starting point and all cadets begin here. After this cadets advance up the rank system based upon merit, leadership ability, communication skills and many other skills they show or possess;

There are no formal examinations taken as promotion is determined by the squadron Commanding Officer, up to the rank of Cadet Flight Sergeant. All ranks for under 18 years of age wear RAF rank slides to show they are minors and not Staff Cadets.

For those cadets who are 18 or over, the rank badge also includes the words "Staff Cadet" to show that they are older cadets. Also cadets over 18 years old are eligible for promotion to Staff Cadet Warrant Officer, the highest rank a cadet can obtain.

This is a Wing appointment and is only granted after an interview with the cadet's Wing Commander, following a formal recommendation by their Commanding Officer. 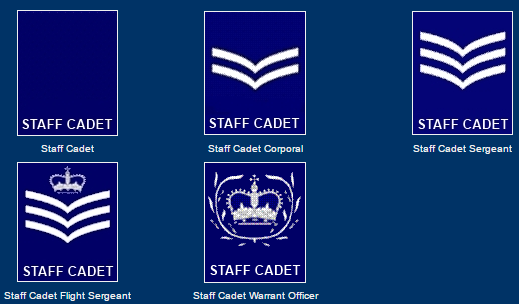 There are 2 distinct branches of staff Rank, Uniformed and non-Uniformed.

The uniformed side consists of two levels - commissioned and non-commissioned officers.
Each play an important part in the running of the Air Training Corps. 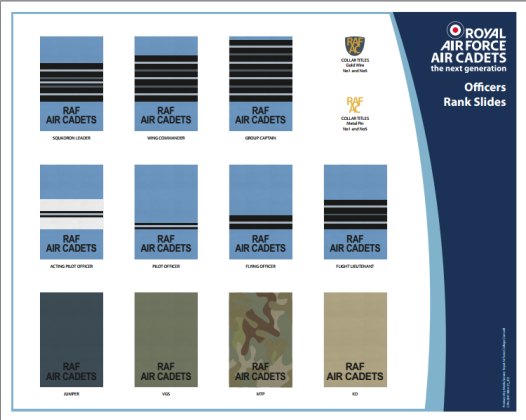 NCOs are members of the Royal Air Force Air Cadets and wear rank slides embroidered with RAF AC to show this. 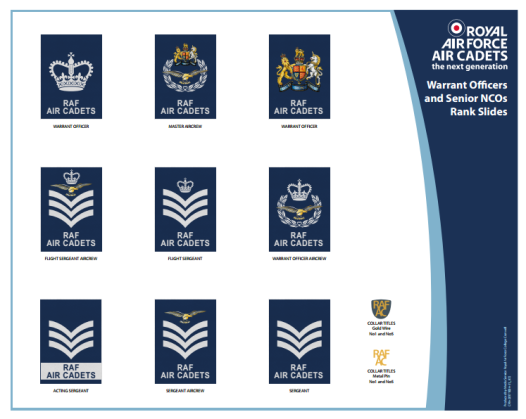 While these members do not wear uniform the Civilian Instructors and Padre's are issued with gilt badges they can wear, to distinguish who they are. 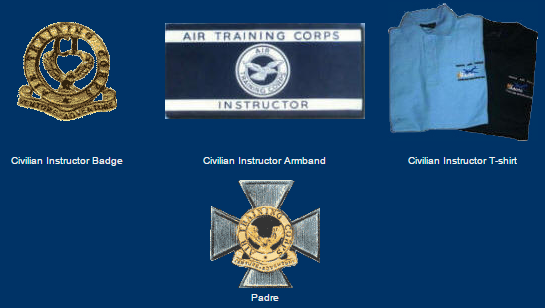 Any queries or concerns?