This is what it's all about - activities that offer challenge, excitement and adventure and the knowledge you pick up along the way through structured lectures and first-hand experience.

Don't worry about being thrown in at the deep end. You'll join the squadron as a trial, get to know the other cadets and start basic training. You will then get gradually introduced to activities as you progress, so you can make the most of every opportunity that comes your way.

During your time in the Air Cadets, you will experience many of the activities shown below:

Your gliding experience kicks off at a Volunteer Gliding Squadron (VGS) flying  in a Viking winch-launch gliders. Your focus, along with others from your ATC squadron or CCF (RAF) unit, will be to complete the Gliding Induction Course (GIC).

Designed to give you a taste for Air Cadet Gliding, the GIC consists of three levels of instruction. On your first visit you'll be taught the GIC 1. Later visits will cover GIC 2 and 3. In these levels you'll learn all about aerodynamics and controlling the aircraft, first in a classroom, then taking control and practicing what you've learned in the air. After you've completed the course, you'll be awarded a GIC certificate.

And from the age of 16, you could find yourself working towards your gliding scholarship, with the chance to fly solo in the Grob Vigilant aircraft. For those with a passion for gliding, you could also apply to become a flight staff cadet and teach fellow cadets how to fly! 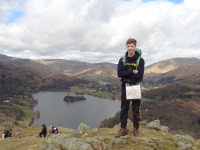 Adventure Training is one of the most popular activities amongst Air Cadets.

The ATC has two Air Cadet Adventure Training Centres (ACATC's) in Llanbedr in Snowdonia, Wales and in the Lake District, Cumbria, at Windermere.
Cadets that attend these centres can experience rock-climbing, abseiling, canoeing, high-ropes, hill-walking and more.

Cadets at all levels of the Air Training Corps have the opportunity to participate in the sport of rifle shooting.

Since the ATC was originally a recruiting organisation for the Royal Air Force it made good sense for marksmanship to be on the training syllabus.
Shooting remains one of the most popular cadet activities

Every year, cadets are given the opportunity to attend a camp on an operational RAF station.

These camps last one week (normally Saturday to Saturday or Wednesday to Wednesday) with the primary purpose of letting cadets see what life is like on an RAF camp.

It is also an excellent opportunity to meet new friends and have a lot of fun. Cadets over 16 years of age may receive a Work Experience placement whilst on the camp where they see first-hand exactly what a job within the Royal Air Force entails.

There are plenty of opportunities for cadets to get in the air. Air Experience Flights could even see you take to the skies in a Grob Tutor light aircraft. Stand out from the crowd and you could be put forward for an overseas flight on a Hercules, VC10 or Tri-star.

If you're really lucky you could even join a pilot in one of our fast-jet aircraft or experience the unbeatable exhilaration of a Red Arrows flight!

In addition, there is also the chance to gain your flying scholarship wings and fly solo in a light aircraft from the age of just 17!

The Duke of Edinburgh Award

The Duke of Edinburgh's Award is a voluntary, non-competitive programme of practical, cultural and adventurous activities for young people aged 14-25. The Award programme consists of three levels: Bronze , Silver and Gold .

Each have differing criteria for entry and the level of achievement necessary to complete each award - use the badges at right to find about each level.
The Air Training Corps is the Commonwealth's largest and highest achieving operator of the Duke of Edinburgh's Award. At any one time there are 15,000 cadets participating in the scheme, and 3000 Air Cadets per year gain gold, silver and bronze awards - in fact, the first ever recipient of the Gold Award was an Air Cadet.
Incidentally, His Royal Highness Prince Philip is the ATC's Air Commodore-in-Chief. Air Cadets who meet the age criteria can join the award scheme, and gain the badges to wear on their uniform.
Click here to visit the official website of the DofE Award.

This is an outstanding opportunity to visit other people and countries and gain an insight to their cadet forces and culture. It is a high profile event, which often includes visiting government officials, military establishments and places of interest. Cadets are expected to act as ambassadors for both their country and cadet force.